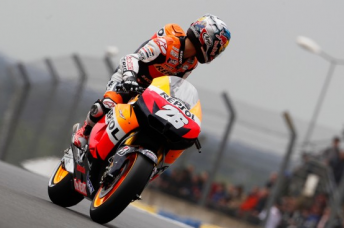 The session started in wet conditions before drying out, with Pedrosa setting his fastest lap with only minutes remaining.

Pedrosa’s top spot is his fourth pole at the famous French circuit.

Stoner had one final crack at beating Pedrosa, but could not lap faster than his Spanish team-mate.

Completing the front row is Monster Yamaha Tech 3’s Andrea Dovizioso, who achieved his best grid position of the season.

Yamaha Factory Racing’s Jorge Lorenzo heads the second row after being held up in traffic on his final hot lap.

Behind him is Dovizioso’s team-mate Cal Crutchlow, who had been the early pace setter in the session, yet couldn’t match the Italian’s pace.

Sixth place is Ben Spies, ahead of Valentino Rossi who recorded his best grid position of 2012.