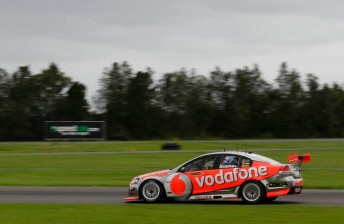 Speculation that Casey Stoner’s retirement from MotoGP competition at the end of 2012 will see the double World Champion make a switch to V8 Supercars has prompted the Australian category to issue an official statement on the matter.

The 26-year-old tested a TeamVodafone V8 Supercar last year, in addition to attending the Bathurst and Gold Coast events as a guest of the Holden squad.

V8 Supercars says it would “welcome Stoner with open arms” should he decide to compete in the category in the future.

“V8 Supercars congratulates Casey Stoner on his brilliant career following his retirement from MotoGP, and wishes him the best in whatever endeavour he chooses, whether that be on or off track,” read the statement from V8 Supercars.

“Stoner has had a strong interest in V8 Supercars, and in particular Team Vodafone, having successfully tested the 888 Race Engineering cars on several occasions.

“He has attended numerous V8 Supercar events in recent years and has made no secret of his passion for the sport.

“His unexpected retirement has brought with it increased media speculation that he will compete in Australia’s pinnacle motor sport category.

“V8 Supercars would welcome Stoner with open arms should he choose to make the switch from two wheels to four, following the likes of Wayne Gardner into touring car racing.

“Regardless of his future plans, Stoner remains a good friend of V8 Supercars.”

Stoner is not the only two-wheeled star to have driven a V8 Supercar in recent years, with current motocross rider Chad Reed and retired MotoGP and Superbike rider Troy Bayliss both testing with TeamVodafone.

Bayliss went on to drive in the 2009 Phillip Island 500 and Bathurst 1000 with Dean Fiore’s Triple F Racing squad.

TeamVodafone team principal Roland Dane declined to comment on the potential fall-out of Stoner’s retirement from MotoGP when contacted by Speedcafe.com this morning.