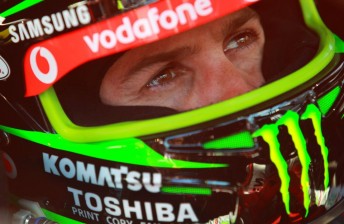 Whincup displaced Lowndes for the top spot moments before Taz Douglas’ iSelect Commodore stopped with a suspected blown engine at the Southern Loop following a high-speed off at Turn 1.

The resulting red flag period lasted in excess of 10 minutes, leaving less than four minutes between the green and chequered flags.

Jason Bright, David Reynolds, Greg Murphy, Garth Tander, Michael Caruso, Russell Ingall, Todd Kelly and Shane van Gisbergen completed the top 10 for the session having all set their times prior to the stoppage.

Rick Kelly did not venture onto the circuit during the 20 minutes while his Jack Daniel’s Racing crew changed the engine in the #15 Holden. The car had earlier dropped a cylinder with David Russell at the wheel in the day’s second session.

A fourth and final practice session for the V8 Supercars will take place at 1455 local time.