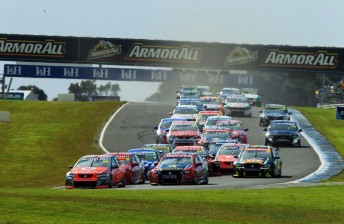 Sunday’s Race 11 of the V8 Supercars Championship at Phillip Island could see competitors complete the entire 200km distance with just one pitstop.

While two-stop strategies have been necessary under the 200km format seen so far this year at Symmons Plains and Hamilton, the single-stop strategy stands as a possibility this weekend due to a combination of the Phillip Island circuit’s flowing nature and the use of only the hard compound tyre.

Although it is accepted that no cars will make the distance if driven flat-out, TeamVodafone team manager Adrian Burgess describes completing the 45 lap race on just two tanks of the 85 percent ethanol fuel as “do-able”.

“There’s an option of doing one or two stops, and I think all teams will be looking at both options,” Burgess told Speedcafe.com of the strategy for Sunday’s race.

“One-stop is certainly do-able for a lot of the grid, but it comes with a very defined window and it means that you’ve got to do a relatively long stint on the tyre as well.

“So there’s a price to be paid somewhere in the race if you do go that way, but that’s the nature of what we do. We have to weigh up the pros and cons of taking on a strategy like that, and work out if we are prepared to pay the price.”

Fuel economy has played a major role in the outcome of several races this season, and has been an area of significant attention for both the teams and V8 Supercars.

Varying fuel pressure during sessions was banned prior to the last event at Barbagallo (CLICK HERE for Speedcafe.com’s previous story), while this weekend has seen control fuel pressure sensors added to the technical regulations.

The rules regarding the fuel trim switch, which allows drivers to switch between four pre-set fuel mixtures of their choice, remain unchanged.

Fuel strategy could be thrown out the window this weekend however if forecast rain eventuates. The Australian Government’s Bureau of Meteorology is currently predicting “isolated showers” for Phillip Island on each of the next three days.