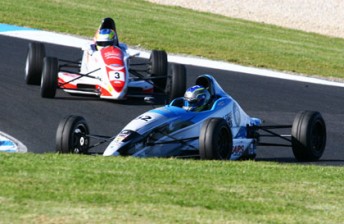 Matthew Hart has got his weekend off to the perfect start, topping both Australian Formula Ford Championship practice sessions at Phillip Island today.

The 18-year-old set his fastest lap in Practice 1, with a lap time of 1:37.72s, 0.4s clear of his nearest rivals Jack Le Brocq, Garry Jacobson, Macauley Jones and Shae Davies.

Hart, who currently trails championship leader Garry Jacobson by two points, says he was unable to get the best from his car due to the wind conditions.

“I probably didn’t get the best out of the car in the second session, the tyres on the car were pretty old,” Hart said.

“In the first session, the wind was causing a few problems, especially coming out of turn two. Hopefully the wind turns around tomorrow and our car will be a lightning bolt.”

The only red flag of the day in both Formula Ford sessions came out when Davies spun off into the gravel trap at Turn 1, taking no further part in the second session.

In the QBE Australian Superbikes, championship leader Joshua Waters set the fastest time in the first of two qualifying sessions. Team Honda’s Wayne Maxwell was only 0.0450s slower than Waters, ahead of Robert Bugden, Jamie Stauffer and Glenn Allerton rounded out the top five.

In the FW1 Aussie Racing cars, Tyler Owen claimed victory in the first race today, ahead of pole-sitter Kyle Clews. Darren Chamberlain was third ahead of Travis Edwards and former V8 Supercars driver Jason Bargwanna, who is a late entry into this weekend’s racing.