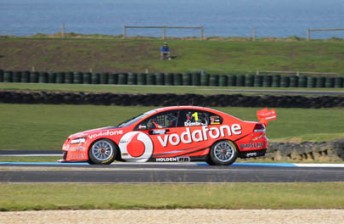 Paul Dumbrell in the #1 TeamVodafone Commodore VE at Phillip Island

Paul Dumbrell has fired a warning shot ahead of this season’s endurance races by dominating the second practice session of the day at Phillip Island in Jamie Whincup’s TeamVodafone Holden.

Dumbrell was the only driver to lap in the 1:33s bracket during the 30 minute session, which was contested by endurance co-drivers and those outside the top 50 percent in the points standings.

The cars of Craig Lowndes and Steven Johnson were the only entries not to venture onto the circuit during the session, with the two drivers currently sitting in the top 50 percent of the standings and not having their co-drivers available this weekend.

The third session of the day is scheduled for 1420 local time and will see the full field take to the track.

See below for the full practice times