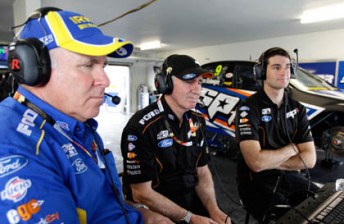 Shane van Gisbergen will continue with Stone Brothers Racing until at least the end of the 2015 season, having extended his current deal with the Ford squad.

The new three-year deal will see the talented Kiwi become the most capped SBR driver.

The three-time championship winning team has also confirmed that sponsor SP Tools will remain with the team for another three years.

Team owner Ross Stone said that retaining van Gisbergen, currently sixth in the V8 Supercars Championship, is vital to giving the team a shot a the V8 title.

“Having Shane and SP Tools on board for the next three years gives Jimmy and I great stability so we can carry on achieving the targets we set ourselves,” Stone said.

“Shane is 23 now and timing is just perfect to try and win a Championship or two in the next few years.

“Everyone in the team is happy that Shane and SP Tools are staying on with us, and it gives us the opportunity to finish off something we have started. We can smell it, we can see it and we can hear it, we just need to go and do it [win a Championship] now.

“I believe Shane is more than capable of winning the Championship. He has natural talent and he is one of those drivers who actually has the V8 Supercar dream. He doesn’t have the desire to race for a European team and he isn’t using this as a stepping stone.”

Van Gisbergen is currently in his fifth full season with SBR, enjoying a career-best year in 2011 with two race victories on the way to fourth in the final standings.

The confirmation of the deal ends speculation that van Gisbergen could be head-hunted by Nissan to fill one of two seats yet to be confirmed at Kelly Racing for next season.