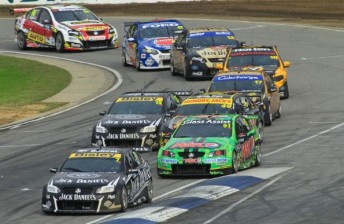 The 26-year-old Australian admitted that he will consider racing V8 Supercars in the future upon announcing his impending retirement from the MotoGP World Championship.

The comments have fuelled widespread speculation that Stoner will look towards a switch to four-wheels sooner rather than later.

Murphy says Stoner would need considerable preparation time before racing against the category’s top names – experience that could be difficult to obtain given the severe testing restrictions currently in place.

“I’ve admired Casey for a long time. His ability and talent on a motorcycle is unsurpassed, it’s incredible,” Murphy told Speedcafe.com of Stoner .

“But turning up in our little backyard with some of the boys that have got the skills that they do in this championship wouldn’t be an easy road.

“Moving straight into the main series would be like jumping into a boiling pot of water, there’s no question about that.

“He’s the kind of guy that would make sure he was ready before jumping into the main game, I would have thought.

“That’d be a decision for him and whoever he aligns himself with. A team like Triple Eight would not fire someone into a boiling pot unless he was ready for it.

“I don’t know what his plans are, but it’d be incredible for this series to have a name like his associated with it.”

Craig Lowndes, whose first Bathurst crown came alongside Murphy in 1996, echoed the Kiwi’s enthusiasm to see Stoner join the class, describing his potential arrival as “a great asset to the world of V8 Supercars”.

“When he drove the car he was very good in a lot of areas. His focus and determination on trying to be fast was really good,” said Lowndes of Stoner.

“In the slow sections of the track he was on par with Jamie and I from the outset.

“On the high speed sections he took a little longer to get to grips with but eventually got to that point. His feel and his ability, knowledge and what he wants from the car is very good.

“He would crossover pretty well, it’s just a matter of what he wants to do.”

The 2012 V8 Supercars Championship continues this weekend with the Phillip Island 300.