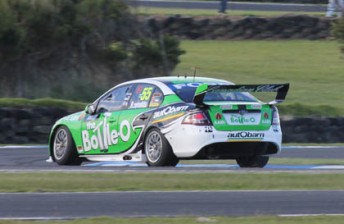 David Reynolds in the #55 The Bottle O Racing Falcon

David Reynolds has set the fastest time in the fourth and final V8 Supercars practice session of the day at Phillip Island.

The Bottle-O Racing Falcon driver was one of just five drivers able to complete a flying lap following a late red flag.

Reynolds’ time of 1:33.83s was 0.16s clear of Todd Kelly’s best effort, which was also set after the chequered flag fell.

The stoppage was caused after David Wall went off the circuit at the Coates Hire Hairpin (Turn 4).

Taz Douglas’ did not make it onto the circuit during the 20 minutes after suffering a mechanical issue in the previous session.

Russell Ingall had time only for in and out laps in the closing stages after the Supercheap Auto Racing crew spent the majority of the session changing the front suspension on his Holden.

The times in the final session were not good enough to eclipse either Paul Dumbrell’s best effort of 1:32.24s from the second session or Jamie Whincup’s 1:32.29s set in the third session.