Casey Stoner says he will consider racing in V8 Supercars

Casey Stoner says he will consider racing in V8 Supercars 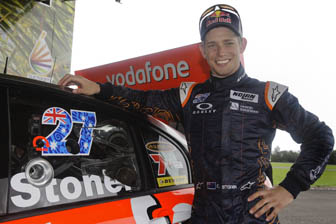 Retiring MotoGP rider Casey Stoner says he will consider competing in V8 Supercars in the future.

Stoner, 26, confirmed in a press conference at Le Mans today that he will retire from MotoGP competition at the end of this year.

Stoner tested a TeamVodafone Commodore VE late last year, and says that he is interested in V8 Supercars, but won’t commit to a switch to four wheels straight away.

“It is something I am definitely interested to do in the future, but whether I will be fast enough or not is another thing,” said Stoner at the press conference.

“That will be not in the near future, the immediate future.”

While he is keen on the idea of competing in V8 Supercars, he says that his decision to retire from bike racing is not linked to his thoughts of racing in the V8s.

“It is by no means any reason for my decision,” he said.

“This has been coming for a long time, it is not something that has just happened.

“I have tested the V8 car, and that is something we have been trying to do for the last two or three years, to be honest, and finally it happened. So there is no coincidence to it whatsoever.”