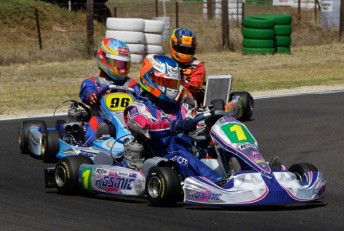 Reigning CIK Stars of Karting Series Pro Light Champion Jake Spencer will face the toughest challenge of his karting career when he lines up in the CIK-FIA Asia Pacific KF2 Championship at the Suzuka circuit in Japan this weekend.

The Victorian will line up in the highly competitive event with the European-based Kosmic factory team in front of some of the most influential people in the karting world.

“I still find it amazing that I’m actually in Japan and will be racing in one of the world’s biggest karting events this weekend,” said Spencer.

“It’s a whole new ball game for me. I’m going to a foreign country, on a track I know very little about and against competitors I basically know nothing about.

“I’ll be going in with both eyes wide open and just trying to do the best that I can do. Cian (Fothergill – 2010 series champion) showed that he could mix it with the best drivers near the front of the field in last year’s event over there, so I feel that there’s no reason why I can’t do the same.

“Without the champions prize of $10,000 towards the trip from the organisers of the CIK Stars of Karting Series I wouldn’t have been able to turn my dream of racing in an overseas event into a reality. Remo Luciani has also been a huge help in getting everything in order.”

Being contested alongside the Asia Pacific KF2 Championship is the opening event in the two-round World KF1 Championship where some of the world’s most famous karting drivers will make a return to the direct drive category.

At the age of 37, karting legend Davide Foré – a Four-time World Champion, will make his return to the direct-drive category with the aim of showing his young opponents that he is still entitled to have his say at the highest level.

Joining Foré on the grid will be Arnaud Kozlinski (2009 winner) and Belgium’s Yannick de Brabander, winner of the World Cup for Super KF at Suzuka in 2009.

The challenge from the younger drivers, who will be out to emulate the feats of Foré, Kozlinski and the like, will be led by Britain’s Matthew Graham, last year’s U18 World Champion. France’s Anthoine Hubert, Italian Flavio Camponeschi, Dutchman Max Verstappen and Italian Felice Tiene will also be expected to figure prominently across the weekend.

Free Practice begins today and will continue tomorrow. Qualifying and the racing will be contested on Saturday and Sunday.