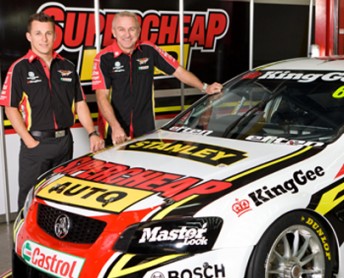 Klien will partner Russell Ingall in the #66 SCAR Commodore in the Sandown 500 (September 14-16) and the Supercheap Auto Bathurst 1000 at Mount Panorama (October 4-7) – the 50th anniversary of Australia’s Great Race.

The team made the announcement at its Walkinshaw Racing headquarters in Melbourne, where Klien met Ingall and was shown over his new Holden V8 racecar by the two-time Bathurst winner.

The former Formula 1 driver will drive the Supercheap Auto Racing Holden colours at Phillip Island tomorrow (Friday) when he takes part in the enduro co-driver sessions.

It will be Klien’s second drive of a Walkinshaw Racing Commodore, having tested Nick Percat’s Coates Hire entry in a secret test at Winton recently.

After racing at the Armor All Gold Coast 600 with The Bottle-O Racing team, Klien is looking forward to get back into the V8 Supercars field.

“I am very excited with this opportunity, to be joining Supercheap Auto Racing and Russell Ingall for the biggest V8 Supercar races of the year is an honour,” Klien said.

“After the Gold Coast I was determined to come back and do more V8 races. It is a strong championship with extremely competitive racing, massive crowds and excellent TV coverage throughout the world.

“Mount Panorama is one of the world’s great circuits and the Bathurst 1000 is world-famous – it’s a must-do race in any racing driver’s career.

“To be able to take part in the 50th anniversary Bathurst with one of V8’s heroes is exciting – I can’t wait to get to the mountain in October.”

See below for video of Klien’s announcement.