Speedway in Auckland set for a potential Mt Smart move

Speedway in Auckland set for a potential Mt Smart move 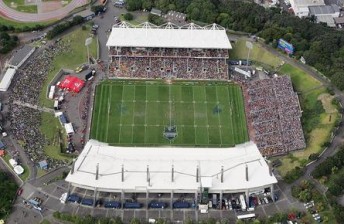 Speedway in the city of Auckland could be in for a move from its current and traditional home at Western Springs to Mt Smart Stadium – the current home of the New Zealand Warriors NRL franchise.

The New Zealand Herald reports that Western Springs, which has held speedway racing since 1936, may be under threat as a motorsports venue due to a proposal tabled by Regional Facilities Auckland.

Under the proposal, the Warriors would move home games to the larger Eden Park, with an expected upgrade of Mt Smart being shelved and Speedway taking up residency there.

Western Springs has long been under threat from noise protestors and the current license to run as a motorsport venue expires in 2014.

The Springs – just four kilometres from Auckland city centre – earlier this year hosted New Zealand’s first FIM World Speedway Grand Prix and doubles as a Rugby Union venue during the winter months. It has also hosted concerts such as Robbie Williams and U2, along with a WWE wrestling event.

The move could be some time off, especially given the Warriors position as a significant stakeholder basing all of the club’s activities from Mt Smart. CEO, Wayne Scurrah told Newstalk ZB that the first he heard of the proposal was through ‘the grapevine’.

“What are they proposing? We don’t just play our games here at Mt Smart, but we’re based here as well and in many ways the amount of time we spend training and preparing for matches are more important than the 12 we play in Auckland,” Scurrah explained.

“We need to know a little bit more. We’ve (New Zealand Warriors) lived all of our lives at Mt Smart Stadium, since 1995, and we still remain committed to Mt Smart Stadium, so I guess we need to understand from the city what is the master plan of the stadium.”