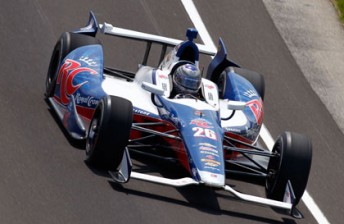 The new-generation IndyCars have set the fastest speeds of the month at the Indianapolis Motor Speedway as the build up to the 96th Indianapolis 500 continues.

Marco Andretti, driving the #26 Team RC Cola Chevrolet for Andretti Autosport, set the fastest time on the fourth day of the month’s testing, clocking a lap of 40.2367s (223.676mph).

The lap times and speeds are only marginally slower than those set in last year’s old Dallara chassis.

Andretti says he if the race was today, he’d be confident he has the fastest car, but he still has some concerns.

“I’m really pleased with where we are at with the race car so far,” Andretti said.

“I have just been really working on the car in a pack, and just trying to stay flat in traffic. We have the car to the point now that I am confident to say we would be the ones to beat if the race was today.

“The speed on its own, I’m a little concerned about. (But) I’ve said it before, I’ll say it again, if we start 33rd, we can still win this race.”

Helio Castroneves, (Team Penske Chevrolet), was second with a lap of 222.025mph, ahead of James Hinchcliffe, Graham Rahal and Ryan Hunter-Reay.

The top 25 cars were separated by a second as teams continued working on race set-ups and simulations on the 2.5-mile oval.

Power says that he was pleased to get laps amongst a pack of cars.

“The Verizon car was really good today. We mostly worked on race setup and also got the chance to see what it’s like running behind a bunch of cars,” the IndyCar championship leader said.

“It was another day of collecting information, and we feel good about where we are.”

“We had a good day in the IZOD car working on the race setup,” he said.

“We were running in a lot of traffic out there, maybe even busier than it normally would be in the race, but I was getting a really good feel for what this car is going to handle like come next Sunday. But until then, we are going to keep on learning.”

The final practice day will be held tomorrow ahead of Pole day on Saturday (May 19), followed by Bump Day on Sunday (20th), leading up to the famous 500 mile race on the 27th.