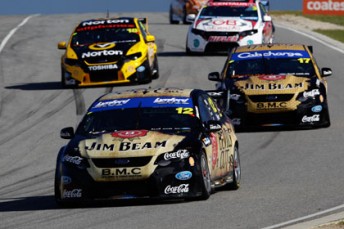 Jim Beam Racing will be without its Sandown and Bathurst endurance drivers at Phillip Island on Friday.

International-based drivers Allan Simonsen and Matt Halliday will miss the chance to drive the #17 and #12 Dick Johnson Racing-prepared Falcons respectively, due to clashing commitments.

Simonsen’s partner is due to have their first child, keeping the Monaco-based driver out of Steve Johnson’s Falcon.

New Zealander Halliday isn’t racing this weekend in his regular drive in the FIA GT1 World Championship, but other commitments will see him miss the V8 track time.

For four V8 Supercars events this year (Phillip Island, Darwin, Townsville and Queensland Raceway), co-drivers are permitted to drive in ‘Practice Zero’ on Fridays. Co-drivers are also allowed to drive in Practice 1, along with regular drivers who are outside the top 50 percent in the championship standings.

DJR chief operating officer Scott Jennings says he is not concerned that Simonsen and Halliday will miss Practice Zero.

“Allan’s wife is due to have their first child. She’s actually overdue, so he is home bound and will miss the co-driver sessions,” Jennings told Speedcafe.com.

“The good thing is that Allan and Matt have done plenty of miles in these cars previously and they are both very experienced.

“Allan is no stranger to V8 Supercars. I worked with him when he drove with Greg Murphy in the Castrol car at PMM (in 2010). I know he can definitely do the job, plus he finished on the podium with Greg last year, so I have got no issues with him being able to pedal the car.

“As for Matt, he ran with DJR last year, he’s very comfortable with the team and with his GT1 commitments, he physically doesn’t have time to come down here. He has his prior engagements. There will be a time and place for him to get some laps.”

In other co-driver news, Kiwi Daniel Gaunt is set to saddle up with Kelly Racing in the co-driver sessions. CLICK HERE for Speedcafe.com’s full news report.