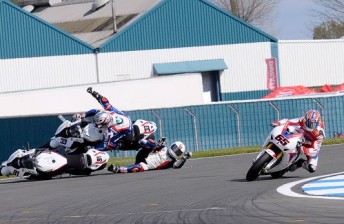 Rea escapes the carnage to take the victory

Honda rider Jonathan Rea has taken a controversial home victory in the Donington round of the World Superbike Championship after triggering a multi-bike collision on the last corner of Race 2.

The race had also begun in dramatic circumstances when Carlos Checa and Eugene Laverty clashed at the first corner. Checa fell in the incident, taking down Jakub Smrz and Davide Giuliano in the process.

A crash for Laverty in the Craner Curves then allowed Sykes to lead the majority of the race before being shuffled back in the closing stages.

Biaggi now leads the championship standings by five points from Sykes after five of 14 rounds. Rea, Checa and Melandri complete the top five.

See below for Foxsports’ video highlights of the day’s racing