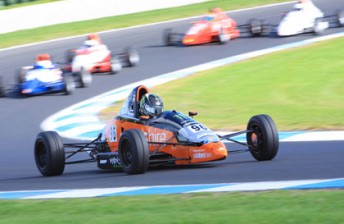 David Sera at Phillip Island during the Victorian State Series round

Sera and de Pasquale will be part of an 11 car field at the famous Victorian circuit, supporting the V8 Supercars Championship.

Sera recently made his state-level Formula Ford debut in his Coates Hire-backed Mygale. The 12-time Australian karting champ has made no secret of his ambitions to use Formula Ford as a launching pad to a career in V8 Supercars, with the Phillip Island round the next step in his progression.

“I had only one test day at Phillip Island before the state round, so I had only ever done a few laps in the car,” Sera said.

“We had a few electrical problems early in the weekend, but we came through and finish third in the final race.

“Still, I need to keep improving, and the racing in the national series is a step up again.

“The biggest thing I’ve found is the race craft, driving on a bigger track with a bigger car takes a bit of getting used to after years in go karts. The technical side of things is also a change, but there are some good people in Minda Motorsport helping me out.

“My plan for the meeting is to continue to improve, and hopefully be in the top five by the end of the weekend.”

De Pasquale, 16, will make his debut aboard a Sonic Motor Racing Services Mygale and has showed good form in the opening two rounds of the Victorian State Series.

After claiming his maiden race and round wins in the recent national round at Symmons Plains, Garry Jacobson currently leads Matthew Hart by only two points, with opening round winner Jack le Brocq a further five points adrift in third.

The Formula Fords will be in action twice on all three days of the Phillip Island schedule, with three races spread over Saturday and Sunday.