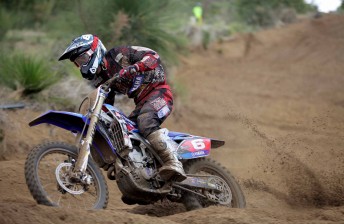 Despite a pinched nerve in his neck Coppins scored moto wins in the first and last moto of the day. His CDR Yamaha team-mate Lawson Bopping played perfect rear-gunner and completed a quinella for Yamaha after results of second, third and sixth. Motul Pirelli Suzuki’s Todd Waters rounded out the podium.

Castrol-backed Kawasaki racer and defending Champion, Jay Marmont won the middle moto – his first since turning green, however had to withdraw late in the final moto – the troublesome knee injury he sustained in the pre-season again playing its part.

It was a similar story in MX2, with Championship leader Luke Styke extending his Championship lead for Serco Yamaha Metal Mulisha. He won the opening two motos, before finishing fourth in the final race of the day.

The last moto was a welcome win for Zero Seven Motorsports Adam Monea – who made his return to the sport this year. Monea was dominant in the last race and that effort propelled him onto the final step of the podium just behind DPH Motorsport Honda’s Cheyne Boyd.

The Pirelli Development category didn’t make the trek west and will return at Murray Bridge for the next round on May 20.

MX1 Championship Standings (after 4 of 10 rounds):