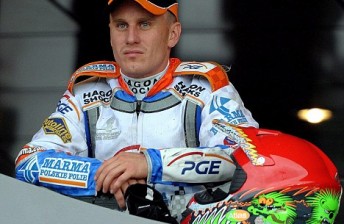 The popular rider – who captains the Lakeside Hammers in the British Elite League – was racing for the Rzeszow team against Wroclaw in Wroclaw. He raced alongside Australian three-times World Champion, Jason Crump at Rzeszow.

Richardson is a former World Under-21 Champion and was an integral part of the Speedway Grand Prix scene between 2002 and 2006. He is also Great Britain’s all time Speedway World Cup top points scorer.

In the first lap crash, he suffered internal bleeding and was having difficulty breathing. He wasn’t knocked out in the impact, which saw him hit the backstraight fence at full force chest-on and he was moving whilst paramedics attended to him on the racetrack. He passed away on the operating table.

“When us riders complain about a track being bad, how can you argue with us? How can you put pressure on us to race on it without fixing it. Now we lose a great guy like lee – probably one of the safest guys on the track because of a track (probably prepared like this) for “home track advantage.”

Despite being one of the most dangerous sports on the planet, rarely does serious injury or death befall speedway motorcycling.

Richardson – the son of a former rider and a television presenter – is survived by wife Emma and three young sons. Lakeside’s next match against Coventry, due for Monday night UK time has been postponed.