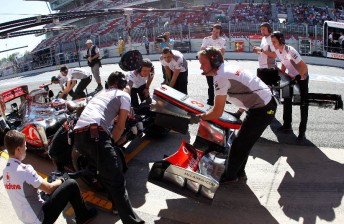 Jenson Button has set the pace on the opening day of practice for Sunday’s Spanish Grand Prix.

The Briton lapped the Barcelona circuit in a best of 1:23.399s to emerge 0.16s faster than Bahrain Grand Prix winner Sebastian Vettel.

Nico Rosberg, Lewis Hamilton and Kimi Raikkonen rounded out the top five in the afternoon session, while the morning’s pace-setter Fernando Alonso could manage no better than 14th.

As usual, practice in Spain saw the majority of teams roll out a variety of upgrade packages, with a revised high-nose design on the McLaren the most notable of all.

Alexander Rossi became the first American since Scott Speed to turn laps in a Formula 1 car on a Grand Prix weekend, ending Practice 1 21st in the Caterham.