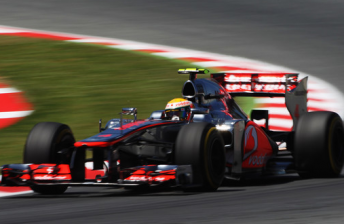 The McLaren driver saved his best for his final lap, out doing the next fastest by over half a second. Hamilton was also fastest in Qualifying 1.

The only drama for Hamilton was that his car failed to return to pit lane at the completion of the final session after the team told the Brit to pull off the track due to an issue.

Maldonando was the star of qualifying, topping the second qualifying session and outpacing his more fancied rivals.

Dual world champion Sebastian Vettel aborted his last lap and will line up eighth. By doing so, Vettel will be able to choose the tyres he starts tomorrow’s 66 lap race on, rather than being forced to start on the tyres he finished qualifying.

Michael Schumacher did not set a time in the final session but will start ninth ahead of Kumai Kobayashi who placed sixth in the Q2, only to pull off on the cool down lap of that session due to a hydraulics problem.

Jenson Button and Mark Webber were knocked out late in the second session and will start from 11th and 12th respectively.

HRT driver Narain Karthikeyan failed to make the 107 percent qualifying cut-off. His position on the race will be at the discretion of the stewards.