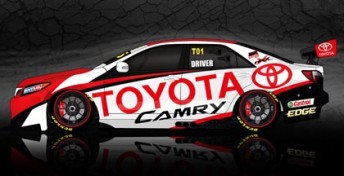 The BNT NZV8 Championship has kicked an early goal as it prepares to introduce its own version of ‘Car of the Future’ for its 2012/13 season.

Set to go head-to-head with new class V8 SuperTourers, the NZV8s will welcome Toyota to its ranks, competing in the new-generation race cars.

The arrival of the Camry will mark the first time a third brand has hit the track in any Ford/Holden V8 series in Australasia.

All the new NZV8s are based on identical tubular steel chassis designed and built by Mitchell Race Xtreme (MRX) in Hamilton.

Teams building new-generation cars can decide which body panels and engines they will use. Engines are approved for the series on the basis of having similar outputs. All cars use a New Zealand-made TT Industries six speed sequential race transmission.

The category has already built a prototype machine (in Ford Falcon guise) and has been tested extensively by Australian NZV8 competitor Jason Bargwanna.

The Camrys will use a four-cam, four valve per cylinder 5.0-litre engine, developed by Toyota Racing Development (TRD) in the USA for Grand-Am endurance racing, sourced by Toyota New Zealand.

The chassis build is now under way and the body panels have arrived, with the first engine is currently on its way from America.

Richards Team Motorsport has also confirmed that the first car is being built for up-and-coming driver Martin Short. The driver of the second car will be announced in the coming months.

Team owner Stephen Richards says that the new-generation cars will increase the interest in the championship.

“This is a very exciting development for the championship and we are looking forward to getting the new Camry race car on the track for the first time,” he said.

“One of the great things about NZV8s is ease with which a wide range of automotive brands can participate. Any suitable mid-sized four door sedan can be the donor vehicle, which maximises the interest and appeal of the championship.”

Martin Short says he is excited to be back in the championship with the new car.

“I think Richards Team Motorsport will be a championship contender for 2012-2013 with this brand new Toyota Camry V8 and I’m really excited to get back into the seat again,” Short said.

“The Toyota Racing Development engine we are using will be a great package and the initial designs of the Camry are very impressive.”

In addition to the two-car Camry team, other Toyota dealers have expressed interest in the initiative, and up to four Camry V8s may front the first round of the championship.

Martin Fine, the Chief Executive of Motorsport Promotions Limited, says the new NZV8 car was designed from the outset to make it easy for teams to race cars from a range of automotive marques in the championship.

“Toyota is a welcome addition as we count down to the coming summer of motorsport,” Fine said.

“We are sure the new Camry V8s will bring even more excitement and diversity to the premier V8 race category.”