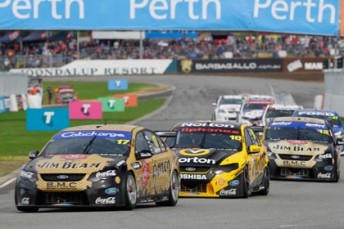 Steven Johnson is one of the most recognised faces in the V8 Supercars pitlane.

That recognition, in part, comes from his team owner, who also happens to be his Dad.

Five-time Australian touring car champion Dick Johnson is one of the great survivors in Australian sport, beating the odds on number of occasions to keep his team alive and, at times, keep them at the front of the competitive V8 Supercars field.

As part of the next phase of his own career, Steve Johnson has moved into a managerial role at DJR, running some of the day-to-day tasks at the team, while setting himself up for his future beyond being a driver.

Speedcafe.com’s Grant Rowley spoke with Johnson about his future – in and out of a DJR Falcon. 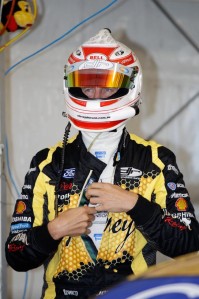 SPEEDCAFE: You’ve taken on a greater management role within Dick Johnson Racing. Is this your first step to the next phase of your career?

STEVE JOHNSON: It is. It’s something that I’ve been looking at for a while.

Timing and work load are the two key things for me. At the moment, I’m the lead car for our team in the championship, so I still have to concentrate on driving, as much as I can. I need to push for strong results, and I feel I’m in a position to bring home the team the best championship position. Driving still needs to be my priority.

But they’ll be a time where I need to take over more of a business role, rather than a driving role.

At the moment, I feel I’m good enough to stay here (as a driver), and I’m hungry to get results. I still get disappointed when things don’t go well.

This team has been through a lot, so now, knowing that I have a greater role in the team, getting strong results is extra satisfy. I’m a lot more hands on in the managerial aspects of the business, the decision making and the future planning.

I think Dad needed someone like that in the team. We have Scott (Jennings, chief operating officer) and a few others helping out managing their areas to the best of their ability, so Dad can focus more on the business, rather than doing it all himself. It’s just impossible.

For one person to come in on a day to day basis, making big decisions … it didn’t make sense anymore. And when it gets tough, Dad is not the right person, because he’s too nice. I’m not saying that because he’s my old man, but he’s such a nice bloke, he doesn’t want to hurt anyone’s feelings or upset anyone. He’s a cruiser and he tries to enjoy life. The poor bugger has been more stressed out than what he should, and that’s really down to the fact that some people haven’t done the right thing by him.

I said to him “I want you and I, and mum, to start making some of the key decisions here, putting our foot down, and if you don’t want to be the bad cop, let me do it.’

It has really helped his confidence, knowing that if we talk about an issue that needs to be sorted, we have steps in place to achieve the right result.

He has never really run the team buy himself – there’s always been people there to help, and some of them haven’t had the team and the family’s best interest at heart. I’m not going to let our family suffer for someone else’s agendas. We’ve done that in the past and it doesn’t work.

We’ve got a crew now where we are on an upward spiral, and it is only going to get better. We’ve still a few heads short in some areas, but we’re not rushing – I want to get the right people for the job. We’re going to being very well funded next year, and we’re going to have all the right people in place.

SPEEDCAFE: Dual roles as driver/owner have been hit and miss in the past. Do you have any sort of timeline in terms of your Dad stepping away from his commitments and you dropping your driving duties to his senior role? Is it three years? Five years? Ten years?

JOHNSON: Timelines haven’t really come up at this stage. I’ve been slowly thinking of it. It’s in the back of my mind on what we should do and how we should do it.

At the moment, it’s just no feasible for me to drop out. A lot of the sponsors want me driving, which is nice, but it means I have to push hard.

I feel like Dad, in a away, where I’m in there doing the best I can, working my butt off to get the car going better with my guys, while also working my butt off with Dad and Scott to try and get the business moving forward. And I’m working my butt off on the media and sponsorship side of it too, seeing the sponsors, keeping everyone happy, doing whatever is necessary to keep them on board, or to bring new sponsors on.

I haven’t been home for six weeks, and I’m not going to be home the next five weekends straight. It can take its toll, but I know that if I work my butt off for the next three-to-five years, get this rolling along nicely, I’ll be rewarded at the end of that time where I can spend more time with my family.

I’ll probably just assess things in the next few years and see what’s what.

SPEEDCAFE: For 2012, how do you feel about having the dual responsibilities of being the driver and, in the background, making business decisions?

JOHNSON: It can be tough. It is very mind draining. Mentally, you’ve got to be strong. I think I’m mentally strong, considering some of the stuff that we’ve been through in the past 10 years.

The big thing is to not think about what we’ve done outside of the car, commercially or internally, when I’m getting in the car to go race. I’m trying ultra hard on keeping those tasks separate. I think about the commercial aspects after the races, or mid-weeks while I’m at home.

It makes for a busy lifestyle. I’m also training every day, plus trying to do family things like being a dad and taking the kids to school – I need about 30 hours in a day!

But I’m enjoying it. It’s a natural progression from me in my life and where it’s going. I want to make sure that when I’m 67 like mum and dad, we’re in a position where we don’t have to worry and my wife and I can enjoy our life.

SPEEDCAFE: You’ve seen a lot happen at DJR in your time – many highs and many lows. Does that put you in a better position, knowing some of those traps that the team has fallen into in the past?

JOHNSON: I think it does. I definitely think it has helped with my business etiquette and knowledge. I certainly can’t sit here and say I’m the best business person, because it’s not what I studied or had much of an interest in.

The way I look at it is that you have to have a balance in business. You need your smarts, you need good support and you need a level of ruthlessness. Dad was very successful behind the wheel of a race car, and he has been ultra successful with fan base, loyalty and everything else, but what he does fail at is that willingness to be ruthless, and he’s not that. That just shows the character of him. If there’s anyone out there who doesn’t like him, it’s not for the right reasons. I don’t care if they don’t like me (laughs).

SPEEDCAFE: Next year is a big year for all teams. How are your team’s plans coming together?

JOHNSON: We want to get back to our winning ways, and there’s a lot of supporters out there who believe we can do it. Next year is a whole different ball game, and we have got, probably, a plan as good as anyone, in regards to Car of the Future.

We’re definitely not scratching through this, getting through month to month like we’ve done in the past. We’ve already done long forecasts for 2013 and 2014, and this has come about since Scott came on board, since I’ve taken a heavier role in management and since Steve Brabeck from Crimsafe came on.

Two and a half years ago, Steve invited me into his office to explain some basics, like a profit and loss statement. He showed me the Crimsafe statements, and the DJR statements, which didn’t look good at that stage. He explained it to me, and I didn’t really understand it, but I took it home and read it, I took it back to his office and kept asking questions.

With that, I learnt so much, and furthermore, we’ve developed an extremely good relationship. He is one of my best mates, and he has got Dick Johnson Racing blood. He is a massive fan, but he has the best interest of the business. He doesn’t want a cent out of it – we even offered him shares. He declined saying “This is a Dick, Jill, Steve and Kelly Johnson’s business. It always has been, it always should have been and it should always be.” His involvement is not going to change because he is not a shareholder. He just wants to see us succeed.