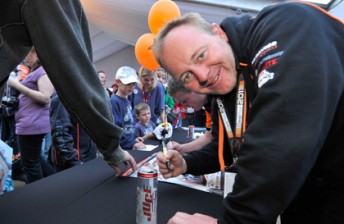 Jason Bargwanna has revealed a new position he will fill in Australian motorsport – and it’s not behind the wheel of a race car.

The former Bathurst 1000 winner has taken the role of commercial director at Keltic Motorsport, the race and management team owned by Tony and Klark Quinn.

The Quinns recently secured the manufacturing rights and the category management agreement to Aussie Racing Cars, adding to their ownership of the Australian GTs.

Bargwanna’s role will see him control the commercial aspects of both racing categories, plus other interests of Keltic Motorsport, who have recently leased space at Paul Morris Motorsport’s Norwell, Queensland, base.

After missing out on a V8 Supercars drive this year (only the second time in 15 seasons), ‘Bargs’ has turned his hand to an office job, but he refuses to hang up his helmet.

“I was focused on a full-time V8 ride at the start of this year, but with sponsorship dollars hard to manage, it didn’t come about the way we wanted,” Bargwanna told Speedcafe.com.

“We looked at the options, but the sponsorship side wasn’t exactly where we needed it to be, and I wasn’t going to do anything unless I could do it properly.

“I’d been speaking to the Quinns about the Aussie Racing Cars for a while, and one thing led to another and I’m very happy with the way it has turned out.

“My role involves building the relationships with current sponsors of the two classes, plus forging partnerships with new companies.

“For now, I’m working on a future in the sport that doesn’t require me to put on my helmet. It’s the next best option for me, but I definitely haven’t retired from racing.”

As well as his commercial and sponsorship role, Bargwanna will also take a driver standards position for the classes, plus act as GT’s baseline parity tester.

“I’ll basically be the ‘motorsport brain’ for the group as a whole,” Bargwanna said.

One of the big influences behind Bargwanna’s decision to take on this new role is the belief he has in the Aussie Racing Cars concept.

He says that its potential as a driver development category is well beyond its current standing.

“What Phil, Brad and James have been able to do is just short of outstanding,” Bargwanna said.

“Everyone loves to watch those cars race. The class produces great entertainment and there is a massive potential for the whole category, beyond the achievements of the Wards.

“For me, it’s the perfect category. The cost of Formula Ford is out of control, and this class can be a genuine stepping stone for young drivers, as well as accommodating some of the guys who have been with the category from the start.”

The next round of the Aussie Racing Cars Series will be held at Phillip Island, supporting the V8 Supercars on May 18-20.

The next round of the Australian GT Championship is also at Phillip Island, on week later, supporting the Shannons Nationals.