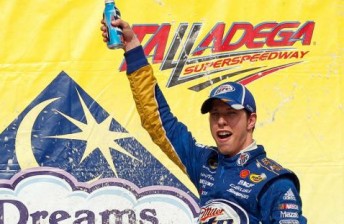 Penske Racing’s Brad Keselowski has out-run Kyle Busch in a green-white-chequered finish to win the Aaron’s 499 at Talladega.

Keselowski won by a relatively comfortable 0.3s at the superspeedway after pulling away from Busch, who had pushed the Miller Lite entry to the front on the restart.

The victory is Keselowski’s second of the season and the sixth of his 99 race Sprint Cup career.

The final caution period came after a multi-car collision near the front of the pack that ruined the chances of Denny Hamlin, Paul Menard, Kevin Harvick, Tony Stewart and Michael Waltrip.

Greg Biffle continues to lead the standings after 10 of 36 races, seven points ahead of Roush Fenway Racing team-mate Matt Kenseth.

See below for the full Aaron’s 499 result