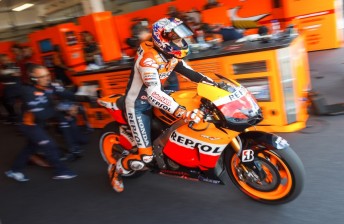 The victories in Jerez (Spain) and now Estoril has put the Australian into the lead of the championship standings.

The defending world champion led for the whole race and, despite Lorenzo (Yamaha) closing to within a few bike lengths at the halfway point, the Australian was able to win his second successive race.

Stoner now has a one-point lead over Lorenzo in the championship.

“I was under pressure throughout the race,” said Stoner.

“I felt good on the first few laps but then we had severe chattering with the bike.

“In the middle laps I didn’t feel confident and I couldn’t push. I just tried to keep Jorge behind me we were lucky to hold on for the win in the end.”

The win was Stoner’s 35th in MotoGP and means he has now won at every circuit on the current calendar.

Repsol Honda team-mate Pedrosa picked up his 100th grand prix podium in third as Crutchlow – who struggled with braking all weekend – was beaten by team-mate Dovizioso for the first time since his move to the Tech 3 Yamaha team over the winter.

Check out the Foxsports report