Will Davison fired up after losing points lead

Will Davison fired up after losing points lead 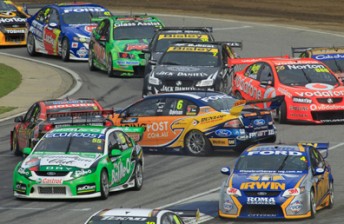 The incident that negated Will Davison's championship lead ...

Will Davison says that he will “come out boxing” after losing the lead of the V8 Supercars Championship at Barbagallo Raceway yesterday.

Davison was caught in the opening lap crossfire yesterday, spinning into Garth Tander’s stranded Holden Racing Team Commodore VE at Turn 7. The damage ruled Tander out on the spot, while Davison’s crew repaired his car to ensure he picked up some championship points.

Despite salvaging some points, Davison lost the title lead for the first time since the opening event in Adelaide.

The Tradingpost Ford Performance Racing driver admitted that after qualifying ninth, he took a conservative, no-risk approach yesterday. Today, he has vowed to fight back. “We just tried to be sensible on the first lap. Everyone was driving like morons out there,” Davison told Speedcafe.com.

“There were people out there driving like mad men, trying to win the race on the first lap.

“Now, we’re not leading the championship, we can just get on with it. We’ll come out boxing for Sunday. I’m fired up for it.”

Davison has decided to take a positive from his tough day yesterday, saying he won’t miss being asked about defending his points lead.

“You’d like to think you can go through each round without a drama, but naturally, these things are going to happen,” Davison told Speedcafe.com.

“It’s probably a good thing. It’s going to change our mind set. I’m sick of everyone talking about the championship. I’ve always known in the back of my head that things go wrong.

“You don’t need to be talking championships now. You have to race hard.”

Today’s qualifying session will be split into two 15 minute sessions, determining the starting grid for both twin 50 lap races, to be held at