Will Davison bounces back with Race 8 victory in Perth

Will Davison bounces back with Race 8 victory in Perth 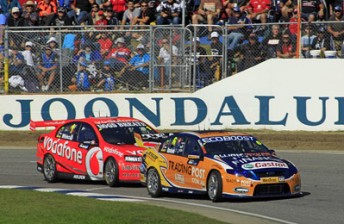 Will Davison has bounced back from a tough Saturday to take victory in Race 8 of the V8 Supercars Championship at the Trading Post Perth Challenge.

Davison was the only front-runner to start the 50 lap race on the soft tyres, taking the lead from pole-sitter Jamie Whincup on Lap 3.

The Ford driver built a six second lead over his TeamVodafone rival before the pitstops started midrace.

Whincup had the gap down to 1.3s with five laps to go, before Davison pulled away to record a 2.9s victory.

Winterbottom and Holdsworth ran line astern with Whincup for the hard tyre stint, but both fell away in the closing stages as the laps took a toll on their soft tyres. The IRWIN Racing Falcon eventually lost fourth to Coulthard on the penultimate lap.

Coulthard’s Brad Jones Racing team-mate Jason Bright had held down fifth for much of the race before eventually falling to eighth.

Alexandre Premat was two laps down in 28th following an early spin and an unscheduled pitsop, while Rick Kelly also endured an off, but recovered to 20th.

Race 9 of the championship is scheduled to kick-off at 1405 local time.

See below for the full Race 8 result