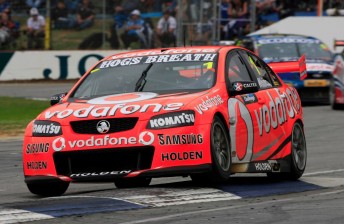 Jamie Whincup has taken his second Armor All Pole Award in the space of 40 minutes at the Trading Post Perth Challenge.

Russell Ingall had set the fifth fastest time of the session but was subsequently excluded for failing to obey parc ferme regulations.

A final 90s scramble was set-up by a mistake from Taz Douglas that saw the iSelect Commodore stranded in the Turn 6 sand trap.

Twenty-two of the 28 drivers headed out for the remaining seconds of the session, but not all made it around in time to start a flying lap.

Whincup had earlier set the pace with 55.53s on his first run, which remained the benchmark until Lowndes recorded his best time with less than three minutes remaining.

In Barbagallo’s unique qualifying format, the Race 8 and Race 9 qualifying sessions were split by just a 10 minute break.

See below for the full Race 9 qualifying result