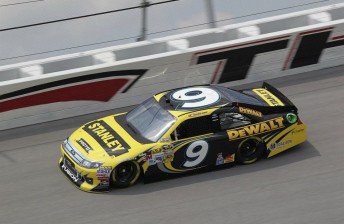 Marcos Ambrose will line-up third for tomorrow’s Aaron’s 499 at Talladega Superspeedway in Alabama.

“We missed the pole by two-one hundredths,” said Ambrose.

“I am proud of Todd Parrott (crew chief), he works really hard at these Superspeedway events. He really knows what to do.

“We just keep getting better and better at these race tracks for the whole Richard Petty Motorsports team.

“We have a chance to win tomorrow. We are going to do whatever we can to stay up front all day and try to lead that last lap.”

The performance for Ambrose in qualifying backs-up the strong speed shown by the Australian in his Ford at NASCAR’s other restrictor-plate track, Daytona earlier this year where he was fast in the Bud Shootout, qualifying and the Gatorade Duels.

Restrictor plate racing is all about working in the draft and Ambrose will be need to pair-up with other drivers to stay towards the front. It’s not unusual for cars to lose more than 20 positions in a single lap if they are caught out of line of the pack of cars working in the draft.

The major thing will be to avoid the accident which is known as the ‘Big One’ as cars run wide-open at over 300 km/h.