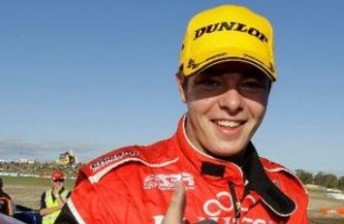 Scott McLaughlin has completed a weekend of firsts in the Dunlop Series at Barbagallo by recording his maiden round victory.

McLaughlin beat pole-sitter Scott Pye to Turn 1 before holding out the Monster Commodore for the entire 18 lap journey.

Just 0.13s split the pair at the finish, with McLaughlin defending the inside line into the final two corners.

Chaz Mostert eventually got the better of Luke Youlden in the battle for third in Race 3 to complete the round podium behind McLaughlin and Pye.

The final race featured a single Safety Car period, which was called following a clash between Percat and Marcus Zukanovic exiting Turn 7 on the opening lap. The side-to-side contact saw Zukanovic’s car spin across the circuit, taking both cars into the inside wall.

The Safety Car period also allowed marshals to clean up debris that had been spread on the front straight by an errant Cameron Waters.

Walsh also briefly took to the grass on the run to Turn 1 having received a hip-and-shoulder from Blanchard.

See below for the Round 2 result

See below for the updated series points standings