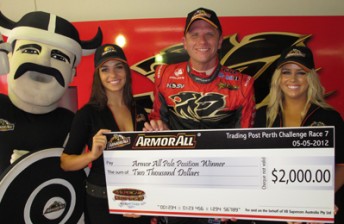 A slowly drying circuit saw a flurry of fast times in the final minutes, with Tander setting his best of 1:02.20s after the chequered flag fell.

Webb sat atop the time sheets for a large portion of the session having become the first to break into the 1:02s bracket after eight minutes.

Winterbottom was the next to improve by recording a 1:02.38s with 30s to go, before Bright and eventually Tander stole away the top spot.

The quickest times in the session were set on slick tyres, despite light rain falling in the closing minutes.

Frenchman Alexandre Premat will start Race 7 from 25th position after a difficult session that saw the Fujitsu Racing GRM Commodore surf through the Turn 6 sand trap in the early going.

Race 7, to be held over 50 laps of the Barbagallo circuit, will commence at 1405 local time. More rain is expected throughout the afternoon.

See below for the Race 7 qualifying result