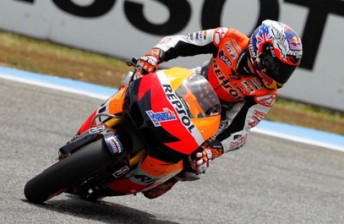 While it was smiles for the Repsol Honda team, there was disappointment for Colin Edwards who broke his collarbone in a crash with Randy de Puniet.

Stoner was pleased with his top spot, but passed on his thoughts to Edwards.

“In general it’s been a good day for us and I’m really happy to get pole,” he said.

“We’ve been pretty fast in every session and our race pace gives us confidence but we’ll have to have a think about which set up direction we go for in warm up and hope this is the best for the race. I was sorry to see Colin has broken his collar bone again and I send him by best wishes.”

Heading the second row is Yamaha Factory Racing´s Jorge Lorenzo, who for the first time, will start off the front-row of the grid in a MotoGP race at Estoril.