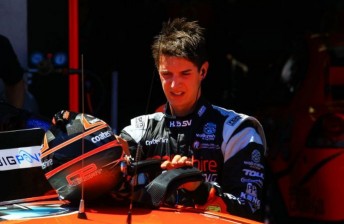 Nick Percat has added a Dunlop Series race victory to his resume in the reverse top 10 grid Race 2 at Barbagallo.

The 2011 Supercheap Auto Bathurst 1000 winner passed pole-sitter Rodney Jane on the eighth lap of the race and was not again headed.

The race was punctuated by two early Safety Car periods. The first was called on the opening lap when a stalled Andrew Jones was clipped by Dale Wood – stranding both Commodores on the circuit.

The full-course yellows flew again shortly after the restart as Matthew Hansen and Michael Hector simultaneously beached their entries in the Turn 1 sand.

Fortuitously, Percat managed to pass Jane between the incident occuring and the Safety Car being called.

Jane’s team-mate George Miedecke endured a wild race, with the second of the Sonic Motor Racing Services Falcons spearing off at the first corner, before eventually chalking up a DNF.

Mostert continues to lead the points standings after five races, with McLaughlin, Percat, Youlden and Pye rounding out the top five.

The third and final race of the weekend for the Dunlop Series will take place at 1305 tomorrow.

McLaughlin and Pye will share the front-row under the combined points format, ahead of Walsh, Youlden, Mostert, Blanchard, Percat, Jane, Jilesen and Russell.