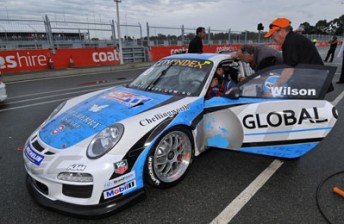 Porsche guest driver Troy Wilson has been forced to withdraw from Round 3 of the Porsche City Index Carrera Cup at Barbagallo Raceway.

Due to licensing issues, the former West Coast Eagles AFL player did not drive in yesterday’s two practice sessions and will watch this weekend’s racing from the sidelines.

He will be replaced by Max Twigg, who was originally slated to miss the event.

The #40 entry is the same car that Heinz Harald Frentzen drove at the Australian Grand Prix support races at Albert Park.

Carrera Cup qualifying will he held at 1010 local time, ahead of the first race at 1530.