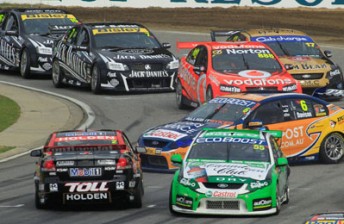 V8 Supercars’ factory Ford and Holden squads have traded blows before, during and after today’s Race 7 at Barbagallo, with FPR team principal Tim Edwards claiming Garth Tander was “on a mission to make a mistake” on a wild first lap.

Pole-sitter Tander fell to third behind Jason Bright and Jamie Whincup in the opening corners of the race, before rubbing doors with Mark Winterbottom as the Falcon driver attempted a pass down the back straight.

The Commodore was then turned around by David Reynolds at Turn 7, before suffering race-ending damage when collected by Will Davison in the third FPR entry.

“It seems like all the FPR cars wanted to run into me today,” said Tander, who dropped two places to ninth in the points standings thanks to his DNF.

“(Jamie) Whincup ran me wide at Turn 6 and got me out of position – it was an average move but it’s racing and you take that.

“Then Reynolds just dive-bombed me and turned me around in front of the whole field. The only other FPR car that hadn’t hit me was Will (Davison) and he did… the front of my car’s stuffed!

The first contact between Tander and Winterbottom had remarkably occurred on the grid, when the Orrcon Falcon’s door swung open as the HRT Commodore was making its way past on its way to the number one slot.

The incident required hasty repairs to Winterbottom’s car, which eventually went on to win the race.

Although laughing off the grid incident, Winterbottom appeared less than pleased with Tander’s efforts once the race got underway.

“Garth was in my door for the majority of the (back) straight – I don’t know what he was doing, but when I saw him backwards I wasn’t surprised,” said Winterbottom.

“He was trying to drive into me down the straight and I was going to stay there, I wasn’t going anywhere, and then a car behind on a better tyre (Reynolds) was coming through.

“He (Tander) had contact on the straight and contact in the corner and around he went, so I wasn’t surprised (that he was turned around).”

Tim Edwards was also displeased with Tander’s driving, and stressed the importance of returning Davison to the circuit after the incident.

“Garth was on a mission to make a mistake,” said Edwards of the opening lap.

“Obviously the stewards will look at it after the race, but from my point of view I don’t think Dave did anything wrong.

“(The contact with Davison) was a separate incident,” he added.

“Gizzy (Shane van Gisbergen) came along and hit him from behind, turned him sideways and changed his trajectory straight into Garth.

“Obviously that was disappointing but it was a great effort from the guys to replace the front suspension and get him back out to score 20 points. Come Homebush, that 20 points might be vital.”

Will Davison has now slipped to second in the series standings behind Whincup after finishing the race 25th.

The stewards investigated the contact between Reynolds and Tander and found there was no breach of the regulations.