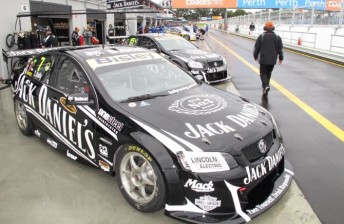 Todd Kelly has proven the fastest man in a slippery third practice session at the Trading Post Perth Challenge.

Kelly’s time of 1:03.83s was set at the halfway mark of the session while the track was at its fastest.

Alexandre Premat brought out the session’s only red flag by dumping his Fujitsu Commodore into the Turn 1 sand at the 20 minute mark.

Having appeared to drop oil on the circuit on his way back to the pitlane, no drivers completed flying laps in the remaining seven minutes of green flag running.

The fourth and final practice session of the day will get underway at 1555 local time.