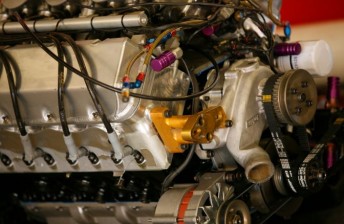 V8 Supercars has moved to stamp-out complex fuel saving techniques by adding to its technical regulations in time for this weekend’s Trading Post Perth Challenge.

The category closely monitored the activities of its teams at the previous event in Hamilton following concern that the widespread push for increased fuel economy has the potential to drive up costs.

As previously explained by Speedcafe.com, several teams are understood to have been experimenting with the practice of varying fuel pressure to coincide with engine revs in order to save fuel under braking and part-throttle.

Methods for achieving such a goal include alternating between different fuel regulators and manipulating the operation of the fuel pumps.

In what is expected to be the first phase of the crackdown, switching between a maximum of two fuel pressure regulators now “must be the only method of controlling the fuel pressure to the engine,” while “no system however described is permitted to vary the fuel pressure from its nominal value during any session or race.”

The wording of the regulations should leave the fuel trim switch, which was introduced last year in order to discourage teams from devising their own methods of consumption adjustment, as the sole mechanical device for manipulating fuel burn rates mid-race.

While unchanged for Barbagallo, it is understood that the rules regarding the trim switch could be tightened for future races. Currently, the four pre-set trim switch positions must sit within a 20 percent window, with no minimum or maximum values defined.

Ford Performance Racing’s technical director Campbell Little, who is a member of V8 Supercars’ Engine Technical Advisory Panel, says that how the rules affect different teams will be something to look out for this weekend.

“It won’t affect us because it’s not a game we’ve been playing, but it’ll be interesting to see if others are affected by it,” Little told Speedcafe.com.

“I think with the end game in site, these rules are saving people from themselves in all honesty.”

Three 120km races will take place at Barbagallo this weekend.