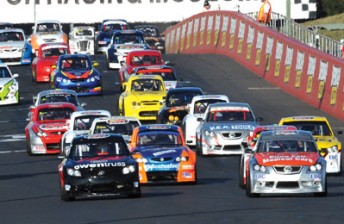 The Aussie Racing Cars category is in the hands of a new owner after creator Phil Ward sold the business to the Quinn family.

Ward has sold the manufacturing rights and the category management agreement to Tony and Klark Quinn, who took over the ownership of the Australian GT Championship last year. The sale of the business was facilitated by Tim Miles from Miles Partners. Miles is a competitor in the Aussies class and was instrumental in the sale of the V8 Supercars business to Archer Capital last year.

The Quinn family will be assisted in their latest acquisition by operations manager Ken Collier and former Bathurst 1000 winner Jason Bargwanna, who will act as the Quinn’s commercial manager.

Ward founded the Aussie Racing Cars concept in the early 2000s, building it into one of V8 Supercars most popular support categories.

Klark Quinn is a former competitor of the class and says that he has a strong passion for the pint-sized racing machines.

“I do have a strong interest in the class. I raced in it in 2003. I’ve had some of the best racing in my life there and I love the excitement and the thrills it offers,” Quinn told Speedcafe.com.

“We’ve taken over the class because we believe in it, but we don’t want to change too much too early, even though we have some big plans. Firstly, we want to give the class the professionalism it needs to move to the next level.”

While no concrete plans are in place, Quinn says that his team will look at implementing Aussie Racing Car’s own version of a ‘Car of the Future’ – aimed at reducing costs.

“Our main focus at the moment is looking after the current customers, but we have plans to build a new generation cars, while maintaining the value of the current cars,” Quinn said.

“There’s a lot of things to consider at this point, and we’re not experienced enough yet to have anything set in stone. We’ll spend the next couple of months looking at options before we commit.

“The whole idea is that the running costs will be cheaper, while maintaining good racing and safety.

“There are a core group of competitors in the series who have been there for 10-12 years, so we’ll have a group discussion with all of the competitors soon.”

Ward says that he has mixed emotions about handing over the reigns of the class that he created 12 years ago.

“I’m more than happy to see someone with a motorsport background take over,” Ward told Speedcafe.com.

“It has been a labour of love since I built the first car. The sale leaves me with mixed emotions. On one hand I’m pleased that it has been sold to a great family who love their racing. On the other hand, I’ll miss the pride and joy I received from building and racing in the category. I still think they are one of the best cars in the world to drive.

“The huge grids and success the category has achieved over time is an indication that the category filled the void the industry needed.”

Ward says that he will continue to be involved in local motorsport, building and restoring historic racing cars.

The next round of the Aussie Racing Cars Series will be held Phillip Island, supporting the V8 Supercars Championship on May 18-20.