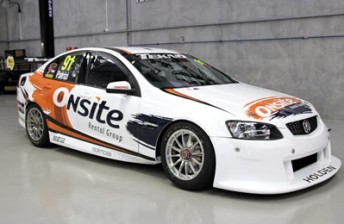 The Tekno Autosports driver will compete with increased backing from existing team sponsor Onsite Rental Group, who have have upped its support for the West Australian event.

After starting the season with two plain white Commodores, both Patrizi and team-mate Jonathon Webb’s cars will appear with branding this weekend.

CLICK HERE for the launch of Webb’s Perth livery.

Both of the liveries on Patrizi and Webb’s cars are one-off deals.

Onsite Rental Group is a national equipment rental company and according to Onsite’s Western Region General Manager Neil Marsh, saw the Perth meeting as an ideal opportunity to increase the profile and awareness of their brand.

“The Perth event is a very important weekend for us to entertain customers,” Marsh said.

“The opportunity for us to brand Tekno’s car #91 and increase our exposure is fantastic. Our business has supported Michael at a level for the last two years and will continue this year. With Michael’s move to Tekno, the sponsorship opportunity has increased (from Carrera Cup) with the increased recognition of the V8 Supercars.

“This weekend will be a bit of a test case for us, and it gives us the opportunity to increase our support of the team.”

While both cars will display some colour for this weekend, the team is still searching for a major sponsor for 2012 and beyond.

The Tradingpost Perth Challenge kicks off on Friday.