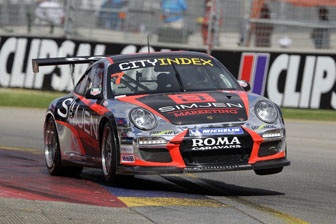 Alex Davison’s assault on the Porsche City Index Carrera Cup has been dealt a blow after the team revealed it has parted ways with its major sponsor Simjen.

After an 18 month association, the business and marketing development company has end its association with the McElrea Racing team, which could put a premature end to Davison’s Carrera Cup campaign.

Davison’s entry will feature no major sponsorship at this weekend’s round at Barbagallo Raceway, although the team has picked up some extra support from electrical engineering consultants Phase 8, who will occupy space on the bonnet of the #7 car.

The car will also continue to carry backing from Roma Caravans.

Currently second in the standings behind Craig Baird, Davison says that the team has the budget to race at Barbagallo Raceway and Phillip Island (May 18-20), but his future is less clear beyond then. 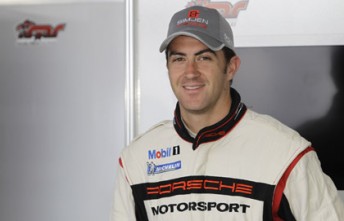 “We won’t be continuing with Simjen on the car for the remainder of the 2012 season. This obviously puts us in a difficult position for the coming round of the championship,” said Davison.

“For us, finding a major sponsor will determine whether we can continue in the championship from Phillip Island onwards. It would be hugely disappointing to drop out of the title fight after such a successful start to the year, which has seen us win a round and be within a few points of the championship lead.

“The search starts now for a new major sponsor – whether it will be in the form of a round-by-round backer or for the rest of the season. We’re obviously keen to get something sorted as quickly as possible so we can continue with the series and focus the job at hand – winning the championship.”

Carrera Cup action kicks off at the Perth track on Friday.