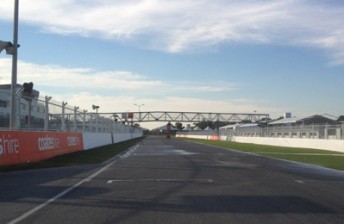 Images of the new over-track footbridge and the pit facilities

The West Australian Sporting Car Club has received all of the construction approvals it needs to host the first event with its brand-new pit facility at Barbagallo Raceway for the Tradingpost Perth Challenge this weekend.

The total cost of the project has been estimated at $10 million.

The Wanneroo circuit was set to hold a club-level meeting recently, but was unable due to on-going construction.

West Australian Sporting Car Club general manager Malcolm Bulley says there may be minor issues over the weekend, but is confident the meeting will be a success.

“Everything is ready, but we’re still a little anxious,” Bulley told Speedcafe.com.

“There’ll be no major problems, but there’s always some issues with any new infrastructure.

“There may be some teething issues, but I don’t know what they’ll be yet. We’ll just tackle them as the weekend unfolds.

“But I have no doubt that it will be a fantastic event.”

The Tradingpost Perth Challenge for V8 Supercars kicks off this Friday.