Three-straight for Will Power in Brazil

Three-straight for Will Power in Brazil 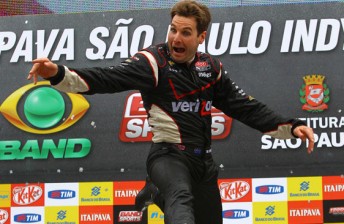 Pole sitter, Power held off Hunter-Reay on a Lap 71 restart with Takuma Sato coming from last position on the grid and a drive-through penalty to finish third.

The Australian is the first driver since Scott Dixon in 2007 to win three consecutive races (Watkins Glen, Nashville, Mid-Ohio). With Helio Castroneves winning at St. Petersburg, it’s the first time in his 44-year motorsports career that team owner Roger Penske has won the first four races of a season.

There were five full-course cautions, including incidents on Lap 29 and Lap 67 restarts that bottled up six cars and eight cars, respectively, in the slow speed Turns 1-2 complex to mix up the running order.

Power, who inherited the point when Scott Dixon pitted under caution on Lap 64, held off Hunter-Reay on the Lap 67 restart, which quickly turned into a Turn 1 parking lot that collected, among others, Dixon. Recognizing it as possibly his final opportunity to overtake Power, Hunter-Reay moved to the outside in Turn 1 of the Lap 71 green flag.

“(The final restart) was the key to winning,” said Power.

“Ryan got a really good jump. I knew I just had to go like you wouldn’t believe through the first complex of corners because I knew he could get a run on me. Ryan is one of the hardest guys you will ever race; he never gives up.Ã¢â‚¬Â

Australia’s other driver in the race, Ryan Briscoe, was runinng inside the top-5, but crashed out of the race after sliding wide after hitting a damp patch on the road.

Here are the top two drivers