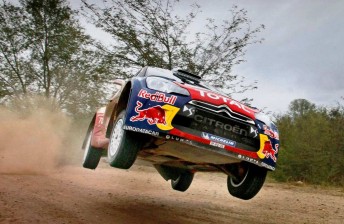 "In your face" Sebastien Loeb wins AGAIN in Argentina

Sebastien Loeb has made it multiples of seven with victory at Rally Argentina.

The victory was the seventh-straight for the Citroen star in Argentina and the 70th of his remarkable career.

It was smiles all-round for Citroen with team-mate Mikko Hirvonen bringing home a 1-2.

Stand-in Ford driver Dani Sordo was set for the final podium spot but hit trouble on the very last run, the Power Stage Amarok Copina, with a suspected broken alternator belt on his Fiesta. The Spaniard’s misfortune handed third position to Mads Ostberg of the Adapta World Rally Team.

Loeb’s success out front was his third in the WRC this season following wins in Monte-Carlo and Mexico. It came after the longest world championship rally in recent seasons with crews negotiating a taxing 502.73 competitive kilometres around Villa Carlos Paz near Cordoba.

“Another victory here in Argentina it’s incredible for me and especially after Portugal it was important for the team to react like this,” said Loeb.

“It has been a great rally here with Mikko finishing second.”

With Hirvonen under orders to hold position, Loeb spent Sunday’s closing six stages preserving his tyres and his advantage out front, while Hirvonen was happy to be back on the podium following his exclusion from Vodafone Rally de Portugal.

“It’s been a good rally and I really love the long distance,” said Hirvonen.

“They are such fantastic stages here.”

Andreas Mikkelsen’s bid for a top-six finished ended when his Skoda suffered a front-right suspension failure on stage 15. He had been locked in a close battle with Volkswagen Motorsport team-mate Sebastien Ogier at the time. Ogier finished seventh behind the recovering Petter Solberg with Evgeny Novikov eighth.

Ford driver Solberg made amends for his exit on Friday’s fourth stage with a broken steering arm by winning the event-closing Power Stage, his sixth fastest time of day three. Although it did little to cheer the dejected Ford team following Sordo’s late exit on his one-off drive in place of the injured Jari-Matti Latvala, by reaching the finish Solberg has extended Ford’s point-scoring run to 150 rallies.