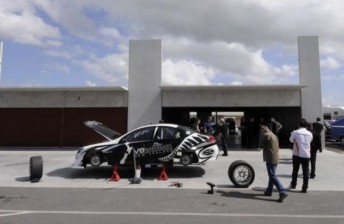 New Zealand’s V8 SuperTourers Series will test further changes to its engine package in the coming days amid a significant disagreement on the correct solution to the issues that have affected the category’s inaugural season.

The control 7.0 litre Chevrolet LS7 engines have been the talk of the paddock during the opening three rounds, with several updates – including the introduction of bonnet vents at Ruapuna and a new sump baffle kit at Manfeild – implemented to eradicate overheating and oil supply dramas experienced by competitors.

Despite the changes, the Melbourne Performance Centre Motorsport-run Supercheap Auto Racing team and Knight Motorsport both suffered overheating problems in practice at Manfeild. The issues forced MPCM to withdraw from the event on Saturday morning, while series organisers reduced the rev limit of the remaining cars by 400rpm (to 6,500rpm) for the rest of the weekend.

According to the category’s managing director, Mark Petch, a second oil scavenge pump and a new water pump will be tested in the coming days, with the former a possible addition for the next round of the series at Hampton Downs in June.

As previously reported by Speedcafe.com, a full recall of the engines will then take place prior to the start of the first endurance race of the season in September, where a full Rob Benson-led overhaul of the sump package is likely to be undertaken.

“It’ll depend upon the track availability at Hampton Downs and the weather, but I expect to have the secondary scavenge pump and the water pump tested within the next 10 days,” Petch told Speedcafe.com.

“If the testing goes well and we’re happy with it, then we can implement the scavenge pump for the Hampton Downs event.” 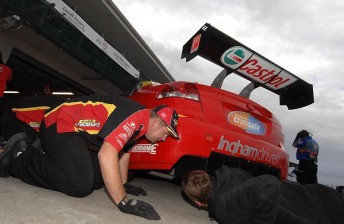 The MPC cars, regularly driven by Scott McLaughlin and Geoff Emery, did not take the start at Manfeild

MPC Motorsport co-owner, Paul Ceprnich, however does not believe the next round of changes will properly address the problems, and has instead called for an upgrade to the car’s radiator package.

Ceprnich, whose company Pace Innovations designed and builds the cars on behalf of the series, admits that the capacity of the cooling system quickly proved itself to be inadequate in race conditions.

“The real issue is being avoided – the cooling is not sufficient, and it hasn’t been sufficient from the start,” Ceprnich told Speedcafe.com.

“Everybody is marginal, it’s certainly not just us. The cars are running with 90 degree water temperature when the ambient is 18. When the weather gets hotter everybody is going to be in trouble.

“It’s very upsetting the way it is being handled. First of all they say it’s oil surge and they want to put baffles in the sump. Then they tell us that our engines are revving higher than anyone else’s, which is not true, and then it’s installation issues.

“We’ve done everything exactly by the book and the thousands of dollars worth of upgrades haven’t worked. It’s all just diverting from the fact that the cooling is insufficient in all the cars.

“In my opinion, improving the cooling capacity by mandating bigger water and oil coolers would solve the problem. These other fixes, including the possibility of adding a second oil scavenge pump, aren’t addressing the real issue.”

Petch defended the decisions made thus far by pointing to the reliability of the remaining cars at the weekend.

“I am satisfied that we understand the issue. The fact of the matter is that we didn’t have any (other cars with) issues, apart from one car that had less than perfect bearings (Andy Knight),” said Petch.

“They elected to run on once we dropped the revs to 6,500rpm (on Saturday morning), and had lower pressures and temperatures all round than they’d ever seen before. That was a direct result of us dropping the revs across all the cars.

Speaking of the mid-season recall however, Petch admitted that upgrading the radiator package will be one of several options looked at.

“We will make more significant changes,” said Petch of the recall.

“As to what those changes are, we have to finalise our testing, speak to the franchise holders and make a collaborative effort. The data will be made available to them and the options will be presented to them.

“Essentially the teams will vote on options available, and the options will be on the basis that we have tested the water pump, a full brand new sump which is what Rob Benson wants, and then we will decide if we want to upgrade the radiator as well.”