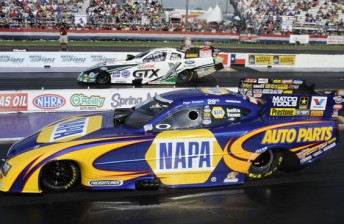 The Castrol GTX backed Neff got past Jeff Arend in the Semi-Final to square off against Capps, who powered past Robert Hight – unable to take his consecutive win streak for JFR to five events in a row.

All eyes in the first round were on the matchup between the two female Funny Car rookies – Alexis DeJoria and Courtney Force. The two glamours of the NHRA paddock hadn’t faced each other even in a qualifying matchup before the first round. DeJoria in the Tequila Patron car got the jump, but Force in the TRAXXAS Mustang was able to power by at the end of the strip.

The win moves Neff up to second place in the points standings 108 points behind Hight, with Capps in third.

Morgan Lucas took his second race of the season in the Geico dragster, defeating Antron Brown in the Final after Brown hazed the tyres. The win by Lucas ends an enormous winning streak that Brown has over him – 12-1 in favour of the Matco Tools racer up until the Final.

Brown accounted for Spencer Massey in round two, Massey having been the man to beat for much of 2012 thus far, whilst Lucas got past Tony Schumacher in the second round also. Schumacher entered an elite club with his win over Doug Kalitta in the first round, it was his 600th round win. He joins fellow Top Fuellers – Kenny Bernstein and Larry Dixon, along with Warren Johnson (Pro Stock) and John Force (Funny Car) as the only other members of the ‘600 club’ in NHRA history.

Australian Dave Grubnic was knocked out in round two by Bob Vandergriff in what was a pedal fest, both struggling for traction on the warm Houston surface. Grubnic had earlier knocked out Clay Millican. Cory McClenathan driving the Santo Rapisarda machine didn’t make the show, qualifying in 19th position.

Brown continues to lead the Championship by 14 points from Massey with Lucas’ win moving him into third – now just 32 points off Brown’s mark.

Vincent Nobile took his first win of the season in Pro Stock – edging out Dave Connolly in the Final. Nobile didn’t have it easy, having to get past Greg Stanfield in the opening round, then account for Larry Morgan and Mike Edwards just to make it to the decider.

Connolly too had his work cut out, disposing of Roger Brogdon, Greg Anderson and Allen Johnson on his way through to the Final.

Anderson continues to lead the Championship convincingly by 60 points from Line with Nobile third.

His passage into the Final was aided when Michael Ray red lighted, whilst Arana had to get by Karen Stoffer to earn his berth.

LE Tonglet was the big name casualty from the first round, going down to Matt Smith, whilst Hector Arana Snr bowed out with a red light in the first round as well.

The win takes Hines to the top of the Pro Stock Motorcycle points standings.