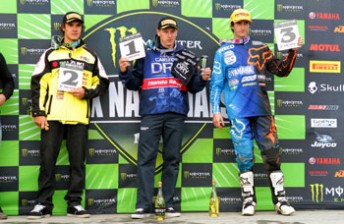 Double British Motocross Champion, Brad Anderson took out the MX1 Monster Energy MX Nationals event at Wonthaggi in Victoria having won the opening moto of the third round of the Championship.

Following up from the opening moto win, Carlton Dry Honda Thor Racing’s Anderson finished second and third in the remaining two motos of the day. He suffered with arm pump during the second moto, however relaxed to come across the line second behind Motul Pirelli Suzuki’s Todd Waters. Waters’ team-mate, Cody Cooper won the final moto, but finished the day fifth overall.

Carlton Dry Thor Honda’s Ford Dale took out the Motul MX2 category after a titanic battle with 07 Motorsport’s Adam Monea, who benefited from having New Zealand identity, Daryl Hurley in his corner throughout the weekend. Josh Cachia broke through for his first moto win in the opening race of the day, whilst Championship leader Luke Styke maintained his good form, winning moto two. Dale won the final moto which guaranteed him the round win.

In the Pirelli Development Series, another new winner in Kiwi Kayne Lamont took the victory after his win in the second moto. He edged out Sam Martin and Kale Makeham, with Martin assuming the Series lead.

The next round of the Championship will be held in Wanneroo, Western Australia – May 12-13.