Reid holds on for victory in Race 2 at Manfeild

Reid holds on for victory in Race 2 at Manfeild 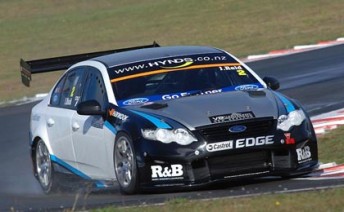 The International Motorsport Ford driver repeated his Saturday performance by leading every lap of the race.

The race was run in two parts after a major incident involving the Racing Projects Falcon of Colin Corkery brought out the red flags on Lap 17 of 25.

Corkery spun into the inside wall on the front straight after a touch form the Holden of Heimgartner.

The restart set up a short dash to the flag, which saw Reid jump to an early lead as Murphy, Knight, Richards, Booth and McIntyre traded places behind.

It was a fraught race for McIntyre, who lost places by running wide at both Turn 1 and Turn 6 prior to the red flag, before being shuffled back into the pack once again in the frantic final laps.

The Safety Car had earlier made an appearance when Pedersen spun his Falcon at Turn 1 on just the third lap of the race.

Also to find trouble early at Turn 1 was Eddie Bell, who was spun by Booth before being collected by a hapless Paul Manuell.

The third and final V8 SuperTourers race of the weekend is scheduled to take place at 1445 local time.

See below for the Race 2 result