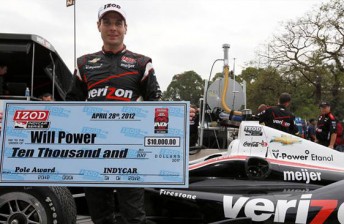 Will Power has collected another IndyCar career pole position

Will Power has set a qualifying lap record on his way to pole position for the Itaipava SÃ£o Paulo Indy 300 at Interlagos in Brazil.

Power posted his lap with three minutes left in the Firestone Fast Six shootout to claim his second-consecutive pole start and his 26th pole of his IndyCar career.

“It’s good to put the Verizon Chevrolet on the pole,” said Power.

“It was satisfying, especially knowing that Honda seems to have an advantage on the straights at the moment, so being on pole is a good start to the weekend. I have a feeling it’s going to be wet, or maybe wet-dry for the race so it will mix things up a lot.”

Rival Dario Franchitti will start besides Power on the front-row of the grid, setting a time just 0.04s slower than Power.

Franchitti’s Target Chip Ganassi Racing team-mate Scott Dixon had an incident during the Fast Six, but managed to take third, ahead of James Hinchcliffe â€“ the only driver to qualify for the Firestone Fast Six in all four races.

Rubens Barrichello, competing in his first IZOD IndyCar Series race in his hometown, missed advancing to the second round by 0.0243s and will start 13th.

Check what the top 3 had to say