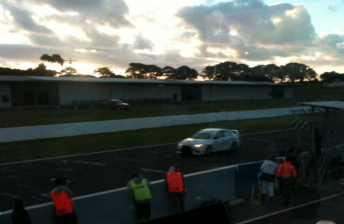 Jim Pollicina and Ryan Simpson have defeated the highly fancied pairing of Stuart Kostera and Inky Tulloch to win the Phillip Island 6 Hour.

Despite completing an extra pitstop during the race, the Poll Performance Mitsubishi Lancer Evo X was able to chase down the TMR entry in the closing stages – the lead changing for good with just two laps remaining.

Simpson crossed the line just 2.5s ahead of Kostera, with the pair both completing 192 laps of the 4.5km venue during a six hour race that featured just one Safety Car period.

The BMW of Nathan Morcom/Chaz Mostert took third outright and first in Class B, albiet some three laps down on the leading duo.

Class E’s sole entry, the Grant Phillips/Grant Turpie/Daryl Martin Proton Satria, went out of the race due to a broken front hub after 86 laps.

The race’s most high profile retirement was the Klark Quinn/Tony Quinn Mitsubishi Lancer Evo X. The father and son pair led 96 of the first 114 laps before an onboard air jack punctured the floor of the car.

Round 2 of the 2012 Radical Australia Cup acted as a support to the 6 Hour, where Tony Palmer took the round victory.

After qualifying fourth, Palmer took his #70 Radical Events sponsored SR3RS to a narrow win in Race 1 on Saturday, before clinching the weekend overall with a second-place finish in Race 2.

Palmer edged out Simon Haggarty by just 0.5 seconds in race one and only fell short of taking the second race by a similar margin – ultimately ceding the win to regular RAC frontrunner Glyn Edis’ SR3 Cup Car after a three-way fight to the flag between the pair and reigning champion Ed Singleton.

Edis finished second for the round, while Radical newcomer Nick Stavropoulos was an impressive third.